Marietta Police officer Harvey Adams was shot and killed in Pulaski County while working an undercover narcotics assignment. The suspect was convicted of his murder and sentenced to life plus 20 years. Officer Adams started working at the Marietta Police Department on September 3, 1985, until his death on August 30, 1986. His body was found on September 4, 1986, buried in a grave. Officer Adams was 30 years old when he died.

He loved to play golf and was an above-average player. Officer Adams was a graduate of Bluffton College in Ohio and worked as a social worker before becoming police officer. He was survived by his fiancée Vanessa Sewell, parents Harvey and Evelyn Adams, four brothers Michael, Calvin, Stanley and Gilbert, and four sisters Juanita Smith, Debra Adams, Teresa Holland and Stacey Adams. He was the first and only Marietta Police officer killed in the line of duty.

City of Marietta employees dedicated a history garden and service memorial in the courtyard at Marietta City Hall April 3, 2009. The garden honors city employees who have lost their lives in the line of duty, including Marietta Police officers, Marietta Fire fighters, Marietta Power and Water employees and employees from other city departments. 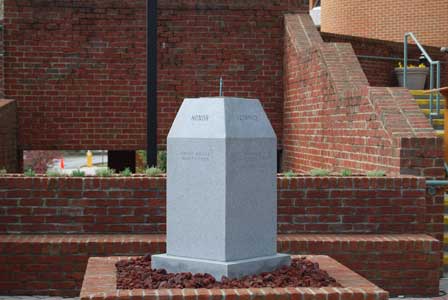